The name of the organ (Ger. Orgel, Fr. orgue) comes from the ancient Latin "organum", but the history of the instrument goes back much further, to the second millennium B.C. The syrinx reed pipe, from the graduated lengths of which the so-called "Pan-pipes" were built, has accompanied human culture throughout its development from its Eastern origins via Hellenic culture to European culture.

The replacement of human breath as an air source by a blast-bag led to the birth of the "tibia utricularia" pipe, with its national variants - the Arabs called it "aganum", the Assyrians, "symphoneia", and the Semites "ugab". The actual first ancestor of the organ is the Chinese instrument "sheng".

The first historical descriptions of the organ of Ctesibius of Alexandria (180 B.C.) are found in works by Pliny, Hero and Vitruvius. This new type of water organ - organum hydraulicum - was actually a hydraulic air compressor. It experienced the period of its greatest development during the Roman Empire, to be replaced by instruments with improved foot-operated bellows used in the Byzantium. This "organum pneumaticum" was used exclusively for secular festive purposes. In 757 A.D. the Byzantine Emperor Constantine Coprynymus sent an organ as a present to Pepin the Short. Pope John VIII asked in the 8th century the Bishop of Freisingen, Anno, to send him an organ, and with it a master craftsman to play and repair it. This instrument, used for instruction purposes, had a keyboard for 15 pipes designated by the letters (A - A1), but no pedals or stops. The pedal was first introduced by organ-builder Louis van Valbeck. We have a 980 A.D. description of the organ at Winchester, which had 10 pipes operated by a single key and required two players. It was a clumsy contrivance, the keys had to be struck by the fists or elbows, and often they had to be lifted. The accompaniment of ecclesiastical chants "cum organis" was first authorized by the Pope Vitalius in the 7th century. In the early Middle Ages, organs had only a small compass, mostly one diatonic octave. The instrument consisted of the wind-chest for uniform wind distribution to the pipes, and of a key that directly opened or closed the access of wind to the pipes. The organ was played by the slides being pushed in (to sound a note) and drawn forward (to silence it.) This type of organ really sounded like an "organum", with fifths and octaves sounding simultaneously. 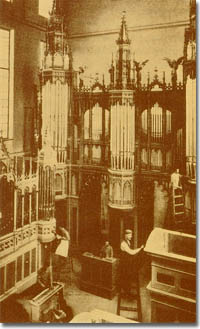 The more demanding requirements posed by multi-voiced music also stimulated the efficiency of instrumental music. The use of instruments expanded considerably already in the period of lyrical troubadour poetry, and the ars nova produced a new impetus. There was increasingly strong emphasis on improvisation, which conquered the scene. Parallelly, independent instrumental forms emerged - altarello, ricercar, ballata, fantasia, and especially the toccata as proof of the growing importance of the organ.

Organ-makers had to satisfy the new sound requirements. "Stops", or "registers", made it possible to sound a single tier of pipes. The 15th and 16th century produced stooped and reed pipes, and thus a much greater variety of tone colour. A milestone in organ playing was the introduction of spring and slider wind-chests. Since the ars nova favoured instrumental-orchestral colour, the need was for building permanently installed "positives" (choir organs) for the wide range of requirements, while portable organs, or "portatives", were used for domestic music-making and often also for dancing.

Conrad Paumann (1410-1473) is the author of the first organ-playing school, "Fundamentum organisandi", written in semi-tablature. 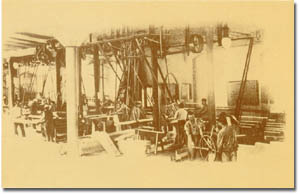 It was only in the 16th century that the method was discovered of controlling the instrument from a keyboard panel by means of an easily playable mechanism. While the 17th century was the era "per cantare e suonare", in other words an era of vocal and instrumental dualism, the next century brought increased influence of the instrumental style. At the dawn of the modern age, the compass of the organ was from CC to C in alt with the entire chromatics apart from CC, DD, FF, and GG, while the remaining notes were reduced to the broken octave.

Different types of organs evolved. The smallest were the portatives, played by one hand while the other operated bellows. The larger positives usually had no pedal, and less usually a pedal linked with the manual keyboard, or with no pipes of its own. "Organo di legno" was a smaller organ with mostly wooden pipes. The regal was a chamber instrument of the organ type with only short reed pipes. 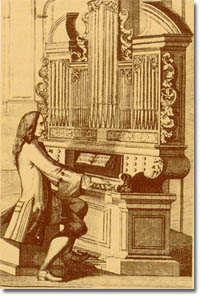 Chrisian Forner invented the anemometer (or wind gauge) in 1667, and in 1691, the organist Werkmeister introduced equal temperament. The 18th century brought rich organ decorations and stopped-pipes. In the 19th century, the broken octaves were eliminated, and the compass from CC to F in alt was established for the manual, and CC to middle D for the pedal. The attempt at producing a swell, made by G. J. Vogler, the inventor of the "Orchestrion", failed at the time. In the mid-19th century, the English organ-builder Charles Barker introduced the so-called pneumatic lever, using for the first time compressed air to open the pipe valve, and thus laying the foundations for pneumatic action. The 19th century also brought motor-driven bellows, adjustable combinations, the swell and the Venetian shutter (louvre) pedals, and the like. Electric action was firmly established by Albert Peschard in 1867.

That was also the period of the birth of the organ-builder firm of Rieger at Jaegerndorf, Austria.

The establishment of the Rieger firm of organ-builders at Jaegerndorf, Austria marked the culmination of the overall development of the Silesian musical instruments industry in the 17th and 18th centuries, when the region's increasingly busy musical life required above all violins and organs.

The 18th century, in particular, was the high point of the work of two families of organ-builders, the Englers of Wroclaw and the Schefflers of Brzeg (now Poland), while the Southern type of organ, used prevailingly in Austrian Silesia, was made by the Rysak organ-builders' clan of Opava, the Staudingers of Andelska Hora (now Krnov, Czech Republic), and individual organ-builders.

The foundations for the Rieger Brothers (Gebruder Rieger) firm, established in 1873, were laid by the firms founder, Frantisek Rieger (b. 13 December 1812 at Sosnova near Krnov, d. 29 January 1885 at Krnov), who served his apprecticeship as organ-builder in the Silesian region and by 1873 had built 32 organs, mostly with mechanical action and slider wind-chests. In 1873, the Rieger firm began to number the instruments made by it, as its Opus 1 drew great attention at the World exhibition in Vienna, where it was shown.

The Paris World exhibition in 1878 proved to be decisive for the firm's growth, since it brought not only international recognition but also foreign orders, so that the construction of a new plant could be started. The importance of the Rieger firm even in its initial stage is evident from the many visits to it by prominent Church and secular personalities, including - as early as 1880 - Emperor Francis Joseph I, who decorated Otto Rieger with the Knight's Cross, and permitted the firm to use the designation "By Imperial and Royal Appointment". Pope Leo XIII also made Otto Rieger a Knight of the Holy Sepulchre.

During the first period of its existence, between 1873 and 1903 (from the establishment of the firm to the death of Otto Rieger and the retirement of his brother Gustav), the Rieger Brothers firm built 1,073 organs, installed in Europe, Russia and the Far East.

In the second period, 1904 - 1920, whose representative was Otto Rieger, the firm consolidated and strengthened the position it had established earlier. Austria-Hungary remained the largest customer, but new contracts were signed with purchasers in many countries including Mexico and Argentia. Rieger entered this period with mechanical, and later pneumatic-action organs, but went on to adopt the modern electric-pneumatic system for most of its large instruments. The firm's steady growth was interrupted by the First World War, after which - following the disintegration of the Austro-Hungarian Empire - the company was forced to seek new markets. The task of leading it back to normal in the new conditions after the First World War fell to Ing. Josef Glatter-Gotz, who became Rieger's administrator on 12 May 1920, and its owner in 1924. In this period it was necessary to take a decision of principle on the new approach to the organ paved by the German "Orgelbewegung" movement, and on the "Unit System", which was imported from America to Europe after the First World War. Under Glatter-Gotz, from 1920 to 1945, the firm built some 1,000 instruments, one half less than earlier in terms of the number of units, but with twice as many large instruments built both for the Czechoslovak domestic market (which took almost one half of the overall output) and for foreign customers in Hungary, Germany, Poland, Austria, South Africa, Sweden, Finland, Brazil, Italy, Argentina, Holland, France, Romania, Yugoslavia, Lithuania, China, Denmark, Belgium, Norway, Portugal, Palestine, Peru, New Guinea, Syria, Uruguay, and elsewhere. 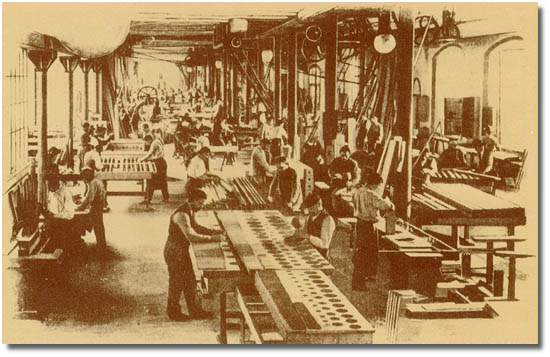 The period in which the Rieger firm was founded was particularly rich in technical innovations. The demand for easy playing and registration which would permit abrupt sound changes and the sounding of large pipe tiers resulted in the abandonment of organs with slider wind-chests and mechanical action, and the slider wind-chest with tone cancellations was replaced by the valve wind-chest with stop cancellations, a principal part of all organs made in the 1895 - 1903 period. Organs made between 1873 and 1895 had mostly mechanical action and abstracts made of wood, while the other parts were metal ones. In two- and three- manual instruments, the control of the mechanical system was facilitated by the Barker lever, which made playing easier, particularly with the couplers on. In 1880, the so-called combined stops system was introduced and patented. In 1895, trials began of tone-mechanical action. After 1901, the pneumatic valve wind-chest was used. Between 1897 and 1904, organs were built with both tone-mechanical and pneumatic-lever action. After 1910, the Krnov plant began to use, and improve, a new free combination system, with pneumatic action. The final years of the firm's first period of existence were characterized by technical and above all tone improvements of the Krnov organs on the line promoted by Dr. Albert Schweitzer's reforms. Rieger's special features included double labial stopped pipes and tubular flute pipes, but at that time the voicing of the pipes was still done at Krnov in the Romantic mode. In the thirties, trials were made of the manufacture of a slider wind-chest for electric-pneumatic action. Before 1945, improvements were made of the playing mechanisms, of the design of the stop pistons and the wind chest transmission mechanism, and of the electrical action.

Today, Rieger-Kloss builds mechanical or electric action organs of the highest quality, and various historical and modern tonal designs, which will last for generations to come.