The Rieger-Kloss Story
Our Beginnings

The establishment of the Rieger-Kloss firm at Jaegerndorf, Austria in 1873, in what is now known as Krnov, the Czech Republic, marked the culmination of the musical instrument industry in Silesia where many of the world's finest stringed instruments and pipe organs were actively produced during the 17th and 18th centuries.

Our firm's founder, Franz Rieger, was known throughout the Silesian region as an organbuilder of exceptional skill. Almost immediately his newly established firm, Rieger Brothers, was commissioned to build its OPUS 1 for the World Exhibition in Vienna. The instrument drew great attention and in 1878 the firm was again commissioned to build another major instrument - this for the World Exhibition in Paris. The Paris showing brought in many new orders and made possible the building of one of Europe's major pipe organ plants in Krnov. In 1880 Emperor Franz Josef I awarded Otto Rieger the Knights' Cross and the Rieger Brothers firm was designated "Imperial and Royal Supplier of Pipe Organs." Pope Leo XIII appointed Rieger a knight of "The Order of Holy Grave."

During these early years from 1873 to 1903, over one thousand organs were built by the Riegers. As the firm's fame spread - many instruments were shipped to Norway, England, Spain, Russia, Turkey, Palestine, Portugal, Denmark, and Germany. Orders also were accepted from such far away places as Argentina and Mexico.

The firm's steady growth was interrupted by World War I and the disintegration of Austria-Hungary. Following these historic events, the firm was forced to seek new markets.

Ing. Josef Glatter-Gotz became owner of the firm in 1924 and was responsible for returning Rieger to its former prominence. Under his guidance the firm built almost one thousand pipe organs; nearly half of these were installed in what was now called Czechoslovakia and the remainder in other European countries and in the distant continents of Africa, Asia, and South America.

The Second World War again played havoc with the firm. Both the securing of manpower and materials became next to impossible in Krnov and organbuilding efforts were forced to be reduced to a minimum. 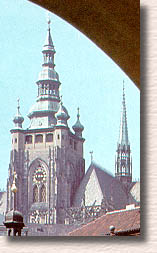 In 1948 the Krnov firm came under state control and was nationalized. It was at this time that the trademark RIEGER-KLOSS was registered. Rieger-Kloss organs soon found their way into the world's major music markets and were, again, given enthusiastic critical acceptance!

Today, once again under private ownership, RIEGER-KLOSS builds pipe organs of all types and sizes in one of the world's largest and best equipped facilities - from intimate sounding small Portatives and Positives to Magnificent Cathedral and Concert Hall instruments - custom designed to fit every musical and liturgical need and budget.

Together with our recent expansion into both the Canadian and United States markets - we proudly continue the organbuilding tradition of world class quality, exceptional value and rich and colorful sound, which began with the Rieger Brothers in 1873.